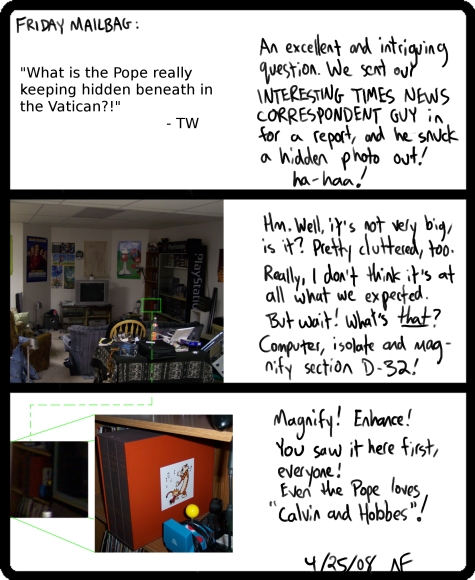 HAIKU:
Question for me, huh?
Send it to journalcomic
at gmail dot com

BEGIN COMMENTARY: That picture was, as you’ve probably guessed, my usual habitat whilst living at my parents’ house. The Playstation cabinet was an actual retail fixture in its former life, but the Canadian Tire store it lived in stopped selling video games and was getting rid of it. A friend rescued it and gave it to me. It had a happy life at my parents’ house, then came with me for the year I lived at my brother’s. It was a huge pain getting it down his stairs, however, and he declared it permanently installed when we were done (which I was fine with). It now houses an enormous collection of fantasy novels. [February 13, 2012]

One thing I was pretty inconsistent on was with representing recognizable (e.g. celebrity) faces. Sometimes I used actual pictures, as in this comic. Sometimes I redrew but attempted realism, like in the one with Ernie Coombs. I forget the number. That method actually turns out to be the most work, which is not what I’m about.

The correct answer, and the one I go with nowadays, is to draw them in my own style. The reason I would just paste a face in would be about a 90/10 split between laziness and lack of self-confidence that the person I’d attempting to draw would look anything like reality. Over the years I’ve gained in self-confidence and become slightly less lazy, and therefore drawing them myself, as stickpeople, is the way to go. [January 18, 2012] 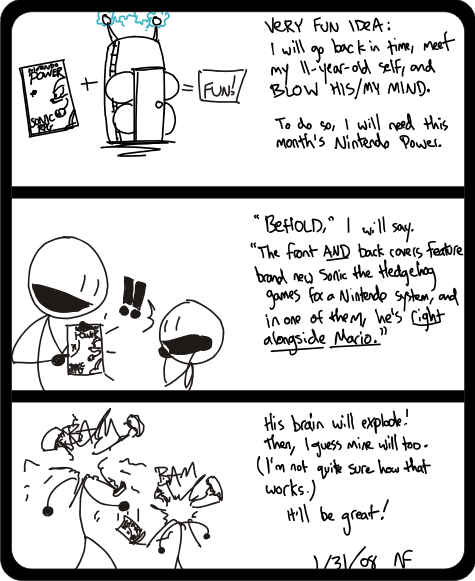