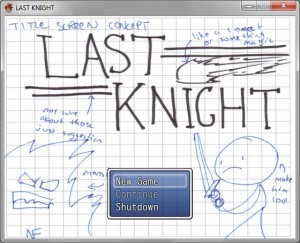 Yes, it’s June 6th and that means Interesting Times is one year older! And YOU get to play a computer game!

UPDATE, June 11th: Click through and scroll to the bottom for some commentary!

Last year I gathered up some money — what I thought was a lot — and tried to branch Interesting Times into game development. I got in touch with a small computer game developer out of Vancouver, and we agreed that I’d handle the script and scenario creation and they’d take care of…everything else.

Eager to begin, I planned out an enormous, sprawling story and sent that along with some concept art and the first pages of the script to the developer. The game was to be a console-style RPG. I received an email the next morning that development had commenced!

At noon of that day, I got another email that development had concluded.

The game was far from complete, but video game budgets are (I’ve learned) extremely large and the money I’d sent was already gone. I do wish they would have warned me this would happen instead of just spending all my money. Caveat emptor, I suppose!

They sent me the parts they’d finished and I’m putting it here for you to try! It is called Last Knight. You’ll need to extract it, but there shouldn’t be any setup required to play. There’s sound and everything but it’s for Windows only! 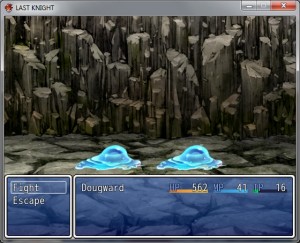 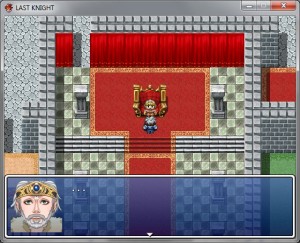 UPDATE: Well, that was fun! Did you enjoy the game? Did you find the secret power ups? Did you go through the Queen’s wardrobe? Of course not, that would be weird.

A few weeks ago I suddenly realized that another site birthday was looming, and longtime readers will know that when possible I like to do something special. A video game was an idea that I’d toyed with several times in years past, but never quite found the combination of time / inclination to pull off.

(One thing I’d still like to do — and I’m not ruling it out — is to use a system like AGS to make a classic point & click adventure).

The idea for the game’s story has actually been rattling around in my head for a few years as well. Console-style RPGs are always about how special you are and for some reason I liked the idea that you are on an adventure not because you are special, but because it sort of fell to you by default. There just isn’t anyone else left.

Anyway! The site’s birthday was drawing near and what should happen but the RPG Maker VX Ace  goes on a deeply discounted sale. I decided to go for it and had about a week of marvellous fun figuring it out. And I’ve only scratched the surface! This is a surprisingly powerful and customizable set of tools. I read some tutorials and learned the rest essentially by trial-and-error. The best part was that the backstory I’d created (about the game development studio giving up) meant that I had an excuse for anything that seemed wonky or unfinished by the time it needed to be posted.

I’m actually very proud of the end result. I took two template maps and spruced them up, adding a lot of details and writing all the little prompts for investigating things. If I’d had a little more time I would have committed to the “concept art” idea that the title implies and swapped out more of the stock graphics for my hasty sketches. Also I had kind of wanted to write a short theme song myself but again, time / energy constraints.

I want to thank my brother Corey and my wife Lori for being my beta testers, and I want to thank the people who expressed real concern that I had actually been defrauded by a real game development studio. Chris in particular (see comments) sent me a follow-up email that was very helpful — moreso had the situation been, y’know, real — and I honestly appreciate the time he took to investigate on my behalf.

One last thing: thanks for reading this far and thanks, as always, for reading my comic at all! Here’s to another year of drawings and chuckles!

2 thoughts on “Interesting Times Turns Eight! UPDATE: And A Confession”