So this is a minor meme from some time ago that I decided to try my hand at. You can click the thumbnail below to open a big image that shows off many of the things that have influenced me and my artwork over the years. Explanations are provided below! 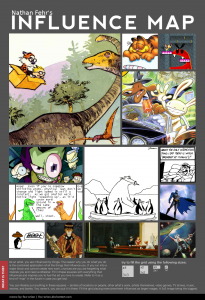 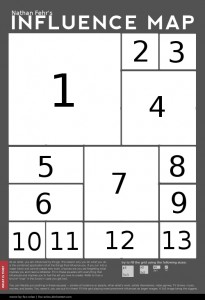 1.) Calvin & Hobbes (Bill Watterson) – What can I say? Growing up I devoured any of these comics I could get my hands on, usually in collections through school book sales. These comics can hit so many different tones and levels it’s unreal, and on top of that Watterson had the temerity to fight for his vision AND avoid selling out. (Of course, I intend to sell out as soon as the opportunity presents itself.) I feel as though my style has been pretty heavily influenced by his, although he’s an order of magnitude more talented than I.

2.)Garfield (Jim Davis) – Ah, Garfield. One thing we all agreed was great as kids, and then grew out of. I don’t have the utter disdain for it that some cartoonists do, but it’s like the Simpsons; I’m aware that it’s still out there, doing its thing, but I don’t feel one way or the other about it. I will say however that I read it like crazy as a child and almost certainly learned the standard three-panel comic setup from it.

3.) Gargantua Blargg (No idea) – The entire game has an incredible, unique art style but this enemy stood out. He’s scary to deal with, but so adorable! I spent a good deal of time copying that character design in high school notebook margins, trying to emulate his simple, expressive charm. It was a valuable lesson about using little things to make a character stand out.

4.) Sam & Max (Steve Purcell) – Specifically, the game “Sam & Max Hit The Road”, which uses this picture on the box. Take one look at Max’s face (he’s the rabbity-thing) and you should be able to see the most obvious bits I tried to copy. I had never heard of the game, and got it as part of a pack (“The Lucasarts Archives”, an awesome bundle of games) and quickly fell in love. Later I’d discover the comics and animated series, but this game started it all. Another, more subtle influence the game had — it, and “Day of the Tentacle” have a thing for backgrounds that are all crazy angles and suggested details. I don’t get quite as German-Expressionist about my backgrounds but I did learn that it’s okay not to have everything look quite realistic.

5.) Invader Zim (Jhonen Vasquez) – This show was utterly bizarre and I loved it. I discovered it after it’d already been cancelled, but the fact that it exists at all is some sort of freak accident anyway. It’s frequently hilarious and loves to rapidly go between “cute” and “disturbing” in any given episode. I read a bunch of Vasquez’s comics as well, but those are mostly just disturbing (much moreso than the show) and not ones I can recommend anymore. What I picked up from his work, however, really changed my approach to stick people; I made them bendy! Vasquez loves dynamic poses and rubbery limbs, and I realized that everyone I drew looked incredibly stiff by comparison. Learning to loosen up my drawing hand and not have so many straight lines really improved my work.

6.) Dinosaur Comics (Ryan North) – I love Dinosaur Comics but the influence here is not so much the art (because it is the same, every day, with only the dialogue changing). No, these comics have changed the way I write in a lot of ways. Sometimes I have to consciously dial back the exclamation marks and SUDDEN CAPS THANK YOU VERY MUCH  and all the other little shibboleths of Ryan’s writing style, because it’s his “voice” and I don’t want to copy it. But it’s so fun! SO FUN.

7.) The Far Side (Gary Larson) – I’m sure a great deal of the jokes flew over my head when I latched on to these comics as a kid, but I loved the expressions and elegant, simple art style. It should be noted, though, that Larson is another one of those artists that can seriously “bring the thunder” and has amazing skills that you may not be able to discern by seeing his day-to-day work. The absurdism and wordplay of these comics really had an effect on me as well.

8.) The Journal Comic (Drew Weing) – I came across this site in university, and it introduced me to the idea that comics didn’t have to have some big, crazy concept (He’s a guy! Who lives with a sentient refrigerator? They have adventures) and you were totally allowed to just write and draw about your own day. This was honestly a novel idea to me.

10.) Batman, the Animated Series (Not sure??) – This was a great show for a variety of reasons, but here is a weird thing that it inspired me to try: drawing capes. Capes, which segued into hair, headbands, anything that “flowed” from wind or motion or what have you. I really like doing it.

10.) Pokey the Penguin (Steve Havelka) – My friend Raphael and I discovered this web comic in high school and we were so utterly hooked. We read every comic, quoted the bizarre non-sequitur dialog and even got a few friends onboard. Pokey’s influence remains to this day. I still quote the comics — though often, I try to subtly work it into conversation strictly for my own amusement — and if there are comics of my own that seem random or nonsensical I am probably still channelling that surreal penguin and his Arctic Circle friends.

11.) Anime in General (Lots of people, I guess) – Pictured is the character Kaneda from the movie Akira, one of the first “serious” anime things I got to see. But, this isn’t quite an accurate selection — while I am quite fascinated by big-budget films like Akira and the like, I got my real start on far cheesier TV shows like Sailor Moon and Ronin Warriors. I use little bits and bobs I’ve learned from anime fairly often, like facial expressions and ways of emphasizing movement, but sprinkled throughout my comics are more specific references, like the explosion I recently lifted straight from the beginning of Akira, or that one where I punched my alarm clock like in Fist of the North Star. (Can’t find either of them readily at just this moment)

12.) Nighthawks (Edward Hopper) – I generally don’t get into Fine Art in a big way, but I adore this painting. It conveys a feeling of isolation that I’ve occasionally identified with, and I feel as though there are stories, entire lives even, behind the people in the diner. I hope I can learn to draw things that are as intriguing as I find this painting.

13.) Sci-fi novel covers (Lots of people) – Pictured is the cover for a Fred Saberhagen novel (Berserker, a favorite of mine) by Boris Vallejo. The library I went to as a kid had a turning rack of sci-fi paperbacks with covers as engrossing as the books themselves, and I used to pore over and let them ignite my imagination when taking a break from the words inside. Anytime I’ve drawn sci-fi things like spaceships or robots it’s almost definitely inspired by the covers of those worn old paperbacks in the far corner of the library.