The problem is that we’d watch like three or four episodes in a row and without fail I would doze through at least one of them. And honestly, not every episode is worth remembering anyway. [January 11th, 2013]

I’ve probably talked before about this occasional, odd impulse I have to just straight-up lie to my readers. I don’t know what it says about me.

BUT this comic was actually kind of encouraging to me because of the outcry it inspired. It also made me wonder how (when? if?) I’d actually end the comic, if it ever comes to that. [ January 11th, 2013]

Today, in lieu of a regular comic I give you this Inspirational Thing I made for my former classmates in the faculty of education. Click the thumbnail below for the whole comic. 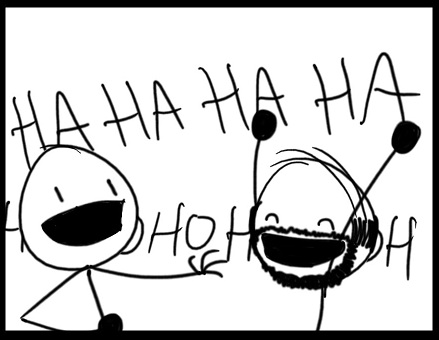 None of those things happened at the wedding. BUT I did manage to sneak lots of  video game music into the reception. My aim was to pick music that didn’t sound out-of-place or call attention to itself, but if other nerds were actually paying attention I wanted them to feel rewarded for being in on the joke. And By George I do believe I succeeded at what I set out to do. [Sept. 4 2012]

I was wondering what I’d written in the first panel so I went back to my workfile and enlarged it. Here we go:

The reason I was interested is that usually I just write nonsense, and do it small and messily enough that when the comic is resized it looks like meaningful text but isn’t. I’ll scribble phrases like “don’t read this please” and what have you. Here I probably spent more time on the first panel than the entire rest of the comic put together, and I guess I’ll always wonder what motivated me to do that. [September 4, 2012]